This vegan barley soup recipe is not only easy to make, but it’s also delicious and full of flavor. Who doesn’t like a hot bowl of soup on a cold night?

Why you’ll love this recipe

Barley is a cereal grain that is most commonly used in cooking to make dishes such as soups, stews, and porridge. It’s also used to feed animals and make beer, among other things.

Barley is also used as an ingredient in some types of breads, cereals, and pastas.

There are two main types of barley used in cooking: pearl barley and hulled barley.

Pearl barley is the most common type of barley used in cooking. It is a polished, or “pearled,” grain that has had the husk removed. It has a smooth texture and cooks relatively quickly, making it a great choice for soups and stews.

Hulled barley, also known as whole grain barley, has a higher nutritional value than pearl barley because it still has its outer hull intact. This type of barley takes a lot longer to cook than pearl barley, but it has a chewy texture that makes it a great addition to salads or side dishes. It also works well as an ingredient in some types of breads and cereals.

Check out the recipe card at the bottom of this port for the full ingredients list and instructions.

Barley has a slightly nutty flavor and chewy texture. It makes for a great add-on for soups. The soup has the same type of feel as a vegan chicken noodle soup but with barley instead of pasta.

How to make vegan barley soup

Add the celery, carrots, onion, and both types of mushrooms. Cook on medium-high heat for about 5 minutes, stirring as needed.

Add minced garlic, salt, pepper, and oregano, and stir for about 30 seconds.

Now add the vegetable stock or vegan chicken broth and 1 cup of the pearled uncooked barley and stir to mix everything well.

Let this come to a boil on high heat, then drop it down to medium-low and let simmer, cooking for 45-60 minutes until the barley is cooked. Add salt and pepper to taste.

This is best served as bowls of soup with some crusty bread or even some garlic bread. You can also serve this easy recipe with soup crackers and a salad.

How to store and freeze pearl barley soup

If you need to store leftovers, here’s how; it’s best to let it come to room temperature and then place it in an airtight container in the fridge for 4-5 days.

You can heat it in the microwave or back on the stovetop when you want to eat it again.

You can freeze this soup in a large batch or a single serving. Let the soup cool, and then place it in a freezer-safe container in the freezer for 3-6 months.

Let this defrost in the fridge before reheating on the stovetop on medium heat until warmed thoroughly.

If you want to bulk up the soup, you can add white beans, more fresh vegetables, small pasta, or whatever you like to add.

A vegan vegetable and barley soup has a lot of nutritional benefits.

It is a great source of nutrients, including vitamins, minerals, and fiber.

Vegetables provide essential vitamins and minerals like vitamins A and C, folate, and potassium.

Barley is a whole grain that is packed with fiber, manganese, selenium, and B vitamins.

The fiber in the soup helps to keep you feeling full for longer and can help reduce cholesterol levels. Additionally, the soup is high in antioxidants, which help to protect against disease and fight inflammation. All in all, this hearty vegetable barley soup is a great choice for a healthy and nutritious meal!

Is there a gluten-free option?

Sadly, this vegan mushroom barley soup cannot be made gluten-free unless you don’t use barley, and then it wouldn’t be barley soup. I have plenty of other delicious vegan soups that are gluten-free.

Can I make this in the Instant Pot?

I have yet to make it in the Instant pot, but you definitely could. I would cut the water back to 8 cups. Use the saute function to cook the vegetables and oil, then add the remaining ingredients and cook on manual for about 20 minutes, then carefully quickly release.

If it’s still not cooked, I would put the lid back on or cook it for longer.

Is barley soup good for you?

I’m not a nutritionist, but yes, it’s full of fiber, vitamins, and minerals.

Do you have to cook barley before putting it into soup?

No, not for this recipe; you want the barley to soak up some of that broth. 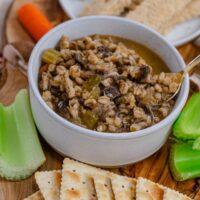 If you loved this recipe, then give it a 5 star rating and leave a comment! I love to chat with you all. Please feel free to share on social media and tag #courtneyshomestead. I would love to see you over on Instagram or Facebook. 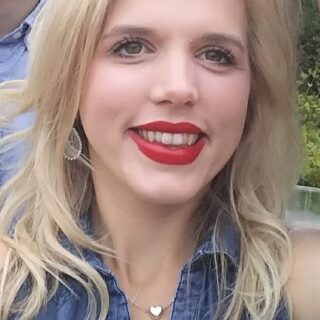