This vegan fudge recipe is not only super simple to make, but it’s also made with basic ingredients, can be made in a few minutes, and tastes like traditional fudge.

I’ve made quite a few different vegan fudge and regular fudge throughout the years, and sometimes it can be tricky.

Some recipes require all sorts of equipment, like a double boiler or candy thermometer (sugar thermometer), but this requires none and turns out perfect all the time.

Plus, who doesn’t like a five ingredient vegan fudge recipe that is delicious?

If you want to make this vegan chocolate fudge with different flavors, you can.

What I love about this vegan fudge recipe;

Can I use all vegan butter or all coconut oil?

You can, but I prefer the taste and texture with the combination of both.

Can I use a different non dairy milk?

I’ve only ever used soy milk with this recipe because of its high-fat content. It would probably work with another type of vegan milk, but I would stick to higher-fat vegan milk.

What is vegan fudge made of?

Vegan fudge can be made from a variety of things. But it typically either has vegan chocolate chips or unsweetened cocoa powder, some form of sugar, some form of vegan milk, whether it’s condensed coconut milk or soy milk, some thicker nondairy milk, and some kind of vegan butter or oil.

There are also healthy recipes that are made with almond butter, cashew butter, and maple syrup.

What ingredients do I need for this delicious vegan fudge recipe?

Check out the recipe card at the bottom of this post for the full recipe.

How do you make this easy vegan fudge recipe?

Take a 5-inch loaf pan, line it with parchment paper, and set it aside.

Take a microwave-safe bowl and add the coconut oil, vegan butter, and chocolate chips; cook for 30 seconds, then stir if it’s not melted, do another 30 seconds and stir until it melts the rest of the way; it shouldn’t need any more time but if it does just be careful not to overcook it.

Add the powdered sugar and soy milk and stir until smooth. Pour the fudge mixture into the prepared pan and place it in the fridge until set up (a couple of hours).

If you would rather use the stove top to make this simple fudge recipe, you can use a double boiler, boiling water in the pot, but not high enough to hit the pot that sits on the double boiler.

Place your chocolate, coconut oil, and vegan butter, melt, stirring until melted, remove from heat, and follow the original recipe.

If you don’t have a double broiler and you don’t want to use the microwave, you can use a smaller pan with a heatproof mixing bowl on top of it and essentially make your own double broiler.

How do you serve this easy fudge recipe?

Once the creamy fudge has had time to set up, take a sharp knife and cut them into small squares.

This is best stored in the fridge until you’re ready to serve.

It will get a bit softer at room temperature.

You want to keep it away from any heat sources; otherwise, you’ll end up with melted fudge.

How do you store this creamy vegan fudge?

This is best stored in an airtight container in the fridge for up to 7 days.

Can you freeze fudge?

Yes, you can freeze fudge either as a whole or cut into pieces.

Place the pieces in an airtight container in the freezer for up to 3 months.

When you’re ready to serve, defrost before serving. 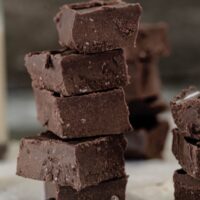 If you loved this recipe, then give it a 5 star rating and leave a comment! I love to chat with you all. Please feel free to share on social media and tag #courtneyshomestead. I would love to see you over on Instagram or Facebook.

Does it have to be soy milk? Or could it be another milk alternative?